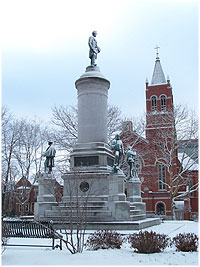 An office boom began in the 1980’s with the construction of Frontier’s (then Rochester Telephone) new headquarters building, followed by Bausch & Lomb’s World Headquarters tower (now Legacy Tower), and then the regional headquarters for Blue Cross and Blue Shield. Add in the Xerox Tower and Clinton Square, and you see why this area has become the city’s main corporate corridor.

There is more to Washington Square than offices however. Geva Theatre Center offers a two-stage, professional theater experience in a strikingly renovated facility that features traditional performances as well as avant-garde theater celebrating the newest playwrights. Dinosaur Barbecue cooks up authentic pit-smoked delicacies and live blues music in a renovated train station hanging out over the Genesee River. The Vesper is a gastropub and raw bar serving up mostly seafood dishes. In addition, the grand two-building Rochester Public Library is the heart of the region’s library system. Rochester Educational Opportunity Center of SUNY is also located in this neighborhood. It is the Downtown Rochester campus of SUNY Brockport that offers a variety of programs including cosmetology, culinary and nursing.

The Washington Square neighborhood probably reached its first highpoint in the period before and after World War II when it was home to elegant theaters, plush watering holes, and fashionable shopping. With the urban flight of the 1960s, many of these buildings emptied out, resulting in a lovely park surrounded by vacant structures.

The rebirth of the Washington Square neighborhood dates back to the ’80’s with the conversion of a former armory building for Geva Theatre. This was followed by the construction of Frontier Corporation’s headquarters, the major library addition, the Bausch and Lomb World Headquarters building (now Legacy Tower), a substantial renovation of the Xerox Tower (originally built in the early ’70s), and most recently, construction of the new headquarters for Blue Cross and Blue Shield. In a relatively short time period the area became one of the most desirable and attractive commercial locations downtown.

As new residential developments enter the Washington Square neighborhood and nearby, the area is becoming a more diverse and lively place to be. The trend of urban living has not missed Washington Square, new lofts and apartments have either been built or are in the planning stages.